Despite cultural, financial and professional barrers, care for the terminally ill is slowly improving in Cambodia. Will Jackson reports.

When Cambodia’s only palliative home care team first visited Chhang Tity, she was weeping in confusion, exhaustion and pain. Uterine cancer had spread throughout the 42-year-old’s body, invading her organs and causing her legs and abdomen to swell up with fluid. She couldn’t sit down comfortably, let alone sleep, and was in constant pain.

The team – comprised of doctors and nurses from Douleurs Sans Frontieres (Pain Without Borders) and local NGO Save Old People Organisation – examined Tity, talked with her and her family about how she was feeling, then gave her some painkillers and sleeping pills.

The following week they returned to the two-story concrete and corrugated iron house that Tity shared with her mother and three children and examined her again. She told them she was feeling much better. She was in much less pain and able to sit relatively comfortably and get some sleep.

As the team left, the children and their grandmother thanked them for helping to relieve Tity’s suffering, palms pressed together.

Even though Tity died a few days later she is considered one of the lucky ones.

Palliative care – the provision of treatment intended to alleviate the physical, emotional and psychological suffering of the terminally ill and their families – is a relatively new concept in Cambodia with few specialist practitioners.

Each year thousands of Cambodians die in unnecessary suffering for want of strong pain-killing medication or proper psychological care.

Practitioners say barriers to Western-style care for the dying include reliance on families providing care, reluctance on the part of some medical staff to change their practices and to deliver bad news to patients and – as in every other sector in Cambodia – lack of money.

And yet – thanks in large part to DSF – palliative care ideals are gradually coming into practice in Cambodian public hospitals, non-government hospices and patients’ homes.

According to anthropologist Susan Needham the palliative care ideal of a “good death” is actually very similar to the traditional Cambodian ideal. The mother of cancer patient Chhang Tity offers her thanks. TONG SOPHY

“From what I understand among Cambodians, it is believed that the moment of death affects the quality of the spirit’s afterlife,” Needham said in an email. “The goal is to keep people calm and relaxed as they are dying (sounds like a form of palliative care to me).”

However, in Cambodian hospitals doctors and nurses are generally responsible only for clinical curative treatment, not “comfort care”. Much of what’s considered palliative care – such as emotional and psychological support – is left to patients’ families who are also expected to feed, bathe, toilet and even change the dressings of their loved ones.

In contrast, palliative care specialists are ideally given extensive training in pain and symptom management and psychological techniques to deal with stressed and upset patients and their families.

Ruth Penfold, a British independent palliative care specialist who has spent the past three years working in the field in Cambodia including a year at DSF, said palliative care principals were first introduced to Cambodia during the AIDS epidemic in the 1990s when hospices, clinics and pagodas began offering care to those dying of the disease but shunned by their families.

Despite this, Penfold describes the palliative movement here as still “embryonic”.

“That whole concept of health care being broader than physical care and getting better is new and they’re missing that tier of carers,” said Penfold.

Kong Nat is the director of Save Old People Organisation. TONG SOPHY

She added that Cambodian doctors were reluctant to let patients die without taking futile and disruptive “heroic measures”, such as violent cardiac compression that can break a patient’s ribs, or to take care of patients’ non-clinical needs.

“In my experience doctors don’t like people dying,” she said.

“They struggle with that here, to the point that if there’s a patient dying on their shift who is expected to die, who is terminally ill, they will move them to intensive care, if they possibly can. They just don’t want that to happen on their watch.

“Now, there are a minority of doctors who have begun to be exposed to palliative care training who are sympathetic to the concept of still being able to offer important care to somebody even if you can’t make them better, they understand you can still help them. That’s the best thing about palliative care, is that you never say there’s nothing more I can do. There’s always something you can do.

“But teaching trained staff [doctors and nurses] here that that something might be sitting with someone for five minutes and holding their hand, they find that really awkward and they don’t want to do it.”

An analogue visual scale used as by doctors as a universal pain measure. TONG SOPHY

What’s more, once patients are diagnosed as terminally ill they are usually sent home be looked after by their family without professional home care.

“So there are a lot of people dying of, for example, very advanced cancer with associated symptoms, not least pain, which is not managed,” Penfold said. “There’s not the knowledge to manage it and there aren’t the drugs to manage it. There’s no access to expert pain symptom control.”

Dr Roger Thay, a French palliative care specialist working with DSF, said one of the biggest challenges to bringing palliative care to Cambodia was dealing with the cultural emphasis on families rather than individuals.

He said he was shocked the first time a patients’ family intervened before he could answer a terminally ill patient inquiring about the seriousness of the illness.

“The patients’ families are afraid that the bad news will just make them worse,” said Dr Thay, who was born to Cambodian parents but grew up in France.

“The doctors here tend to just tell patients that everything’s going to be OK.

“I would prefer to tell them but if the family says no, I will not. Because if I tell them then that will destroy the relationship with the family, the trust between them. And that would be even worse.”

Someone who is much more positive about the progress of palliative care in Cambodia is Dr Eav Sokha, the head of the oncology department at Phnom Penh’s public Calmette Hospital and the former head of oncology at the Khmer-Soviet Friendship Hospital.

Dr Sokha said palliative care was a priority at the hospitals and the standard had improved a great deal in the past decade.

He said a 24-bed cancer treatment ward opened in Calmette in January with a full roster of staff trained in palliative care.

While the while the ward was not free – patients are charged $24 a night – he said palliative care was also provided in the free 200-bed Medicine B-ward.

He disagreed with Ruth Penfold’s criticism that Cambodian doctors focus ed too much on curative medicine at the expensive of palliative care.

While about 70 per cent of cancer patients arrived in the advanced stages of cancer which was incurable, he said medical treatment – such as radiation treatment – was often still necessary to prolong their lives.

“I agree there’s a need to establish a terminal ill care facility or services in Cambodia in the whole country,” he said. “But now we have two hospitals where we can take care of cancer patients with curative intent and also at the same with palliative care intent.”

Dr Sokha added that later this month construction would begin on the National Cancer Centre which would include an entire floor for palliative care when it was completed in 2015.

He said a major issue that did need to be addressed on a national basis was the provision of palliative care – particularly pain relief – in the provincial and district hospitals.

Under Cambodian, law only properly trained doctors can prescribe morphine and then only for one week at a time which means patients or their carers living in the provinces must return to Phnom Penh every seven days for a new prescription.

patient so that when they need terminal ill care the patient does not have to move to the city,” he said.

Despite having only a small team and a tiny budget, DSF is one of the major driving forces improving palliative care services both in Cambodia’s hospitals and in patients’ homes.

It is also working with Buddhist NGO Save Old People Organisation (SOPO), based at Wat Taphem near Phnom Penh Airport, to establish the palliative home care team as an autonomous and independent service not reliant on foreign donations.

SOPO director Kong Nat – who is a monk – said the spiritual aspect of palliative care was important in Cambodia.

He said when a Cambodian was dying the family would usually invite a monk to the home or hospital to pray for them.

“When the patient sees the monk, they feel more comfortable. Belief is very important.”

SOPO’s Dr Sao Thy said he had found palliative home care to be of benefit to patients.

“Patients feel happier and always ask for more support,” Dr Thy said. “It’s never been seen like this in Cambodia before.”

DSF’s Dr Thay said he sometimes felt that the NGO’s work in Cambodia was like trying to bail out the ocean.

“We have made about 100 visits to only 27 patients in the past two months out of the thousands of people dying in pain,” he said.

But he said the best thing he could do was to make Cambodians realise that suffering was not inevitable.

“And a lot of people are motivated to improve the health status of this country, so I think it’s worth doing.”

One of the regular destinations for SOPO and DSF’s palliative home care team is the St Elizabeth Catholic Sick Shelter in located in southern Phnom Penh.

The shelter – which opened in 2008 – has two doctors and four health facilitators on site to provide 24-hour care for up to 18 patients, primarily cancer sufferers from outside Phnom Penh receiving treatment at the nearby Khmer-Soviet Friendship Hospital.

Vantha Dy, from Kandal province, stayed there recently after having his foot amputated in a bid to slow the progress of an aggressive sarcoma that had spread throughout his body.

The palliative home care team provided the 30-year-old with pain killers and medication to ease his breathlessness and discussed his condition with him.

Afterwards he said the pain had eased and being able to talk about his fears had given him some peace of mind. He was even able to smile. 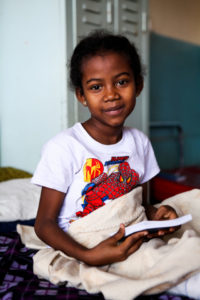 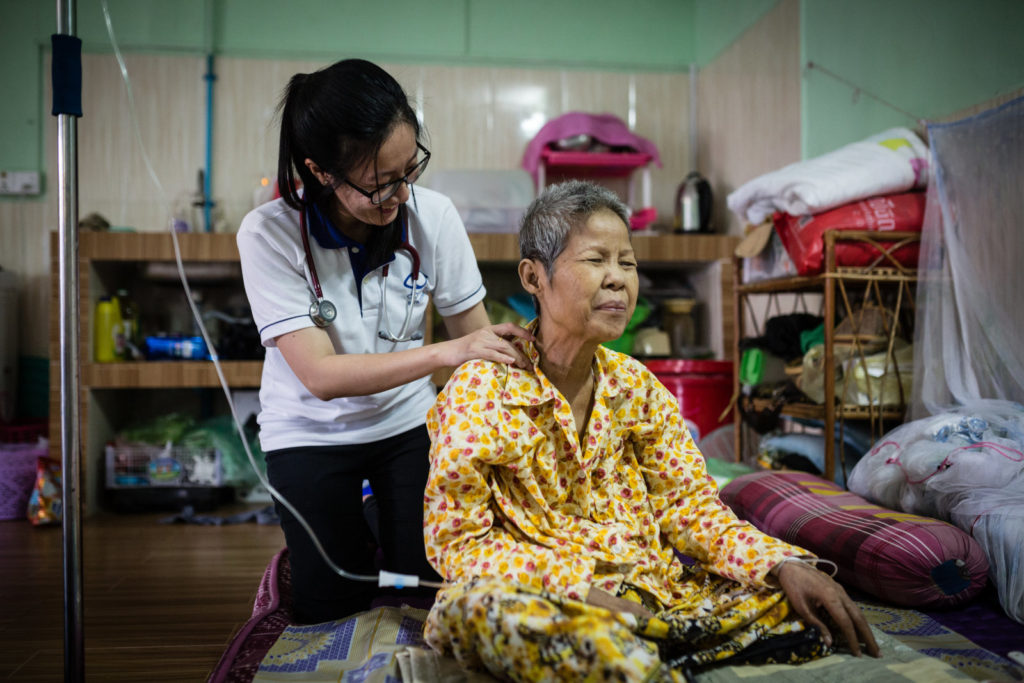